As we revealed last week, today's update focuses on new character and player models in game.

Flashing Lights now features six playable characters for each department, with an equal number of male and female options. There are also six new NPC models, we've introduced changes to a police mission, and added a player list available to view during online games. On top of that, there are tons of important bug fixes, so make sure to read the full patch notes towards the end of this announcement. Read on for all of the details!

We've replaced all departments' characters with new models and textures using Adobe Fuse - a lovely character creator tool which allows us to quickly introduce new characters into the game. There are now six player character options per department.

The software also comes with a selection of new animations... one of which was given to a player model accidentally but did make him much more fabulous!

This was a random idle pose that we had imported into the game. It doesn't really reflect the rest of the presentation, so we have not included it in this build. The pose made holding fire extinguishers while idle look incredibly odd.

Since launch, players have arrested and rescued thousands of bald men in white vests. Our first wave of diverse NPCs are now live, meaning that the days of bald, white vest guy-only are over.

We have had to disable the hats and glasses temporarily, but be assure that they will return alongside more customisation options.

Additionally, we have made some changes to the police callouts. The 'Officer Needs Assistance' callout can now take place in one of over 10,000 locations on the map. Once we iron out many of the issues with this system, we do plan to introduce this to other callouts, increasing gameplay variety.

We've added a new player list for those of you playing online. Simply hold the Tab key during an online game and a list of all the players currently in the server will appear, alongside information on further details at the very top of the screen. 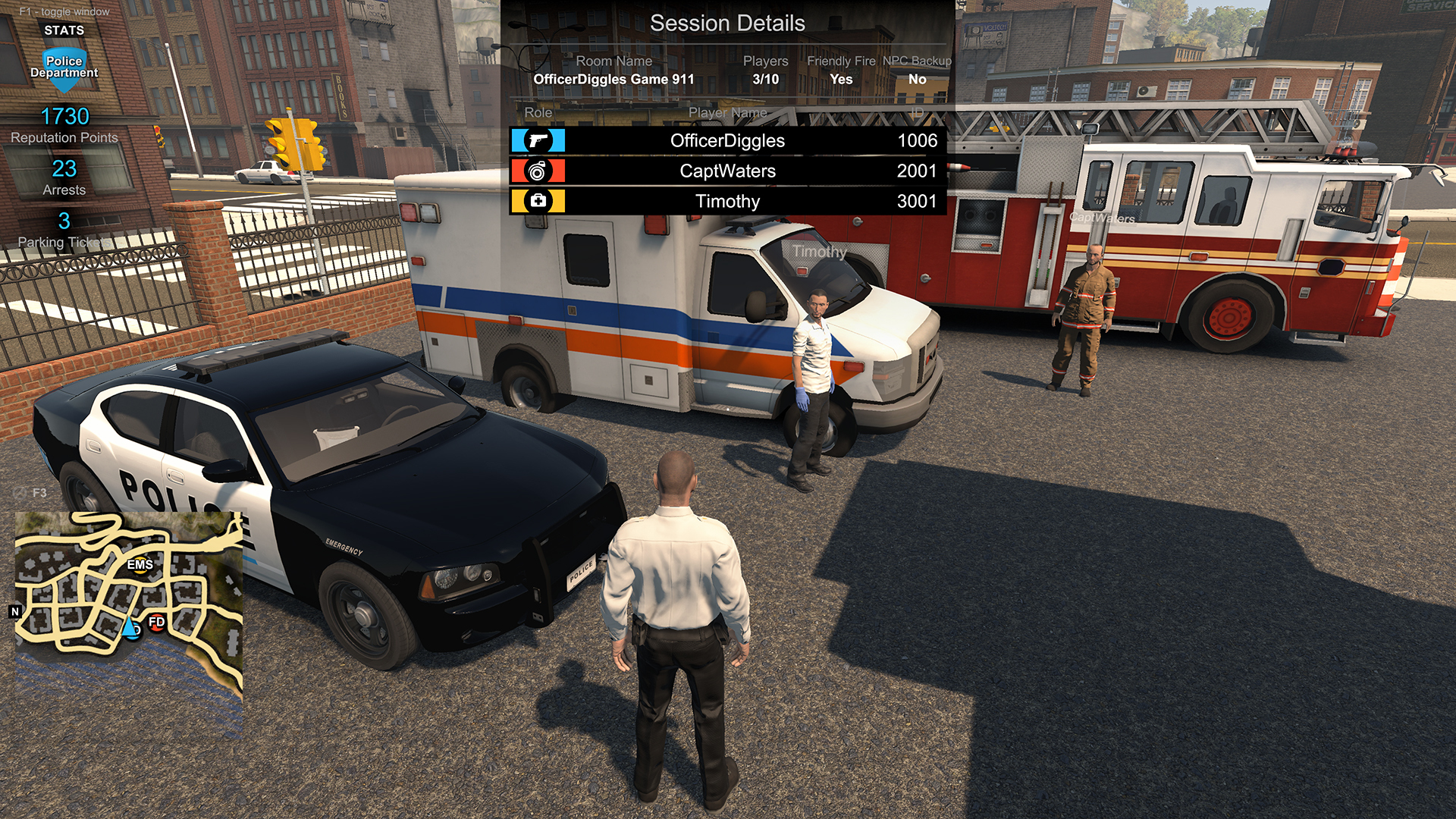 Additionally, we have added a few text commands allowing the host of the server to control who they want in their games. The following commands can be used while in the chat box to kick (remove a player from the current lobby) or ban (disable a player's ability to rejoin the current session) a player.

That's it for this week's update! We are still hard at work on addressing bugs and adding more content to the game. Thank you to everyone who has supported us over the last five weeks and a big welcome to those of you who are joining us now.

As a reminder, the Flashing Lights Discord community is still growing, with tons of community discussion and input from ourselves. Make sure to join in for access to new update testing opportunities.

- Multiplayer suspects no longer disappear.
- The player character can no longer fall through the ground when spawning.
- Player characters no longer de-sync when a client joins. Previously there was a chance that player characters would sit in the wrong vehicle seat when this happened.
- Suspect can no longer be stopped while in an on-foot chase by the player clicking to talk to them. Suspects now only stop when tasered.
- Speed gun MPH bug fixed. Previously the speed displayed in km/h.
- Player characters' feet no longer stick out of vehicles or morph through seats.
- Character tool/weapon IK adjustments. This should improve the stance of the characters hands when holding a weapon.
- Vehicle seat position adjustments implemented.
- vehicle sound is no longer affected by movement of the mouse.
- Alcohol test max value adjusted to 0.3.
- Fixed an issue where after using the Jaws of Life to open the door, you would need to use it again before you could interact with the patient with the med bag
- Only vehicles can now displace road signs, not characters.
- Fixed an issue where the player character would jitter when sat in another player's vehicle.
- Player minimap tag now appears on spawn, rather than shown when loading into the game.
- If all involved players in a call change role or leave the session, the mission will now cancel.
- Drunk drivers now swerve left/right.
- Interaction menus and trunk - left click now acts as accept, right click as back.
- The player now receives negative reputation points when arresting an innocent NPC.
- Taking out a suspect from another player’s vehicle now works as intended.
- Hitting signs will no longer stop the vehicle completely.
- Drunk driver callout description text altered.